Puff adders are found throughout Namibia except for the arid coastal deserts.

Puff adders are mainly nocturnal (active at night) animals, but are often found basking in the early mornings and late afternoons. They are short stubby snakes with triangular shaped heads distinct from the rest of the body.

When threatened a puff adder will hiss and curl up in an S-shaped position indicating that it is ready to strike. Left alone these snakes pose no real threat. Puff adders have a cytotoxic venom (cell and tissue destroying). This snake is considered to be one the most medically important snakes in Africa due its wide range throughout the continent and because it is responsible for 60% of serious snake bites in Africa. However puff adder bites are rarely fatal.

Basic first aid: Keep the victim calm, elevate the affected limb, transport the victim to nearest hospital as soon as possible. Do not cut or suck at the bite site. 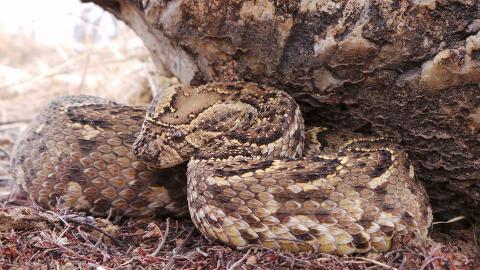